This is a specific review about Aeiusny portable power station by a third party.

We made it for Aeiusny. The original product link on our website:

Welcom to email us to get details about this power station.

The artical details (Click here to see the original artical): 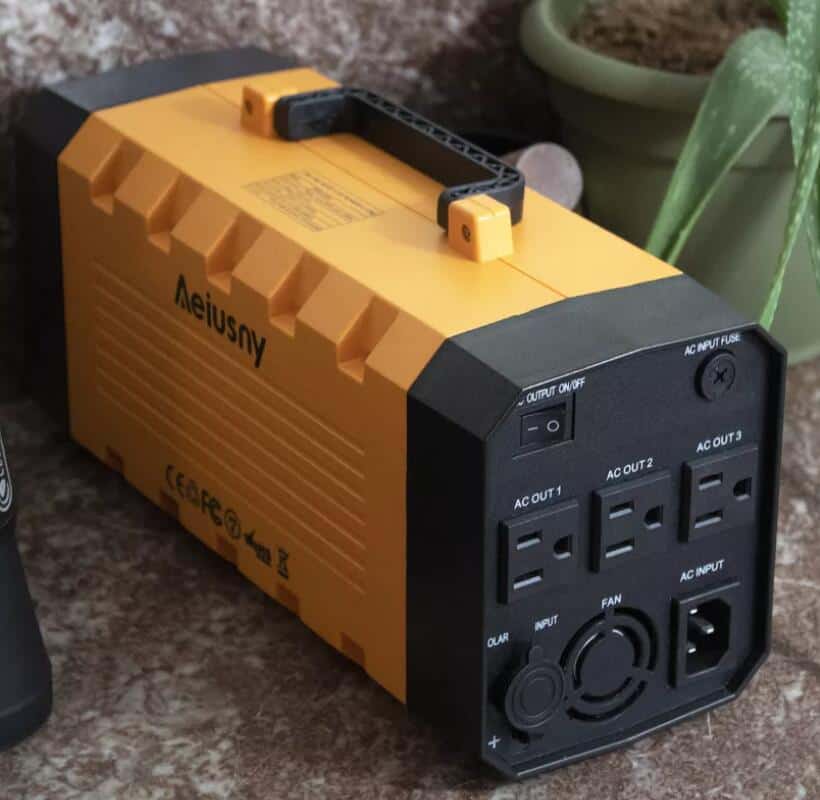 The Aeiusny 288WH Portable Solar Generator is too big for a daily carry, but it’s a fantastic choice for any situation where a more convenient source of power won’t be available. With its pure sine wave inverter, it’s even suitable for sensitive medical equipment like CPAP machines.

eiusny bills this unit as a portable solar generator, but it’s really a large lithium ion battery combined with a pure sine wave inverter and some other hardware. The solar component only comes into play if you buy an additional accessory, but you also have the option to charge it via AC power at home or in your car on the road. It comes with a large assortment of inputs and outputs, a big 288WH battery, and even a bright LED flashlight, making it a great choice for camping, day trips, survival situations, and any time or place where easier access to power isn’t available.

Living in an area known for natural disasters and potentially prolonged power outages, I’m always on the lookout for ways to generate backup electricity without storing gas or propane. And while I didn’t run into any hurricanes during my time with the Aeiusny 288WH Portable Solar Generator, I did put it through its paces over the course of a long weekend, testing charge speed at home and on the road, its ability to keep devices like my phone and laptop charged, and whether that big battery capacity is really all it’s cracked up to be.

Design: Basic and blocky with a faux industrial look

The Aeiusny 288WH Portable Solar Generator is made of hard plastic with a two-tone orange and black look. The notched and corrugated aesthetic gives it a rugged appearance, although the plastic doesn’t feel that tough and actually rings hollow when you tap on it.

The overall form factor is evocative of a lunchbox or a small portable radio, with the main body of the Aeiusny 288WH being blocky and rectangular with a carrying handle attached to the top of the device.

Inputs and outputs are split between the front and rear of the unit. The front has the USB ports, DC ports, an LED lamp, the battery capacity display, and a few switches. On the rear, you’ll find the power inputs, AC outputs, fuse access, and another switch. It’s a fairly clean setup, although there are a few issues with outlet placement that I’ll address later on.

I’m not really convinced that this unit is worksite ready, but that’s not really what it’s for. It isn’t waterproof, and I see no indication that it’s dust proof or resistant either, but I was careful to keep it out of the elements and it held up fine for me.

Initial Setup: More complicated than it needs to be

Initial setup is fairly simple, but the instruction manual makes it out to be more complicated than it really is. The manual gives a procedure for connecting the AC power cord, and then says you have to turn on the AC output switch. In practice, the unit will charge just fine with that switch off, as indicated by the charge light.

If you want to use this unit as a UPS, then you do need to switch the AC output switch on. This allows you to charge the internal battery, provide power to a device that you want on the battery backup, and then provide emergency power to that device if the power goes out.

Charging the device in your car via the 12V adapter works the same way. Plug the device into a 12V adapter, and it will start charging automatically. However, the device will show a full charge erroneously if the charging voltage is over 12.4V. If that happens, you have to unplug the charger and plug it back in.

Display: Basic but it gets the job done

The Aeiusny 288WH Portable Solar Generator has a red digital display that shows the remaining charge level of the battery. The display only lights up when either the DC or AC output is switched on.

Sockets and Ports: Great assortment of inputs and outputs

The Aeiusny 288WH Portable Solar Generator comes with a lot of ports. For inputs, you can choose between AC power, 12V DC, or an optional solar charger. For outputs, you get three power outlets, four USB ports, and four 12V DC ports.

The three-pronged power outlets work great, but they were too close together for some applications. If you need to plug in any wall wart style chargers, for example, you’ll end up blocking one of the outlets.

For the USB ports, you get two 1A and two 2.1A ports, all of which are standard USB-A. There are no high wattage USB-C ports, so I had to pack my Pixel 3 and Nintendo Switch chargers and plug them into the power bank’s traditional outlets to take advantage of high speed charging.

The three-pronged power outlets work great, but I they were too close together for some applications.

The 12V DC barrel connector ports are less likely to see use, because they’re specifically limited to 12V and 3A. It’s a nice feature if you have any devices that can be powered by 12V DC, but you’ll have to find your own barrel connector adapter to take advantage of it.

Battery: Plenty of power and a pure sine wave inverter

The Aeiusny 288WH Portable Solar Generator is too big and bulky to use as a daily carry, but that bulk and weight are the result of a large 288WH lithium ion battery and a high quality pure sine wave inverter. The large battery capacity means you can depend on this unit to provide the power you need for most small electronics, and the pure sine wave inverter means its suitable for sensitive electronics like CPAP machines.

When used over the course of a long weekend away from power, I was able to charge the high capacity battery in my HP Spectre x360 once, keep my Pixel 3 fully charged the whole time, fully charge my Nintendo Switch twice, charge my Kindle that I wisely forgot to charge ahead of time, and even had plenty of juice leftover to run the LED light intermittently at night.

The large battery capacity means you can depend on this unit to provide the power you need for most small electronics, and the pure sine wave inverter means its suitable for sensitive electronics like CPAP machines.

Aeiusny claims you can get a full two nights of CPAP usage out of this unit. I wasn’t able to verify that, since I don’t use a CPAP, but they do recommend you switch off the heater or humidifier function if your CPAP supports those modes due to excessive power consumption.

Keep in mind that this power supply is rated at 500W continuous, which means you can’t use it with anything that draws more than 500W during normal operation. It can handle brief spikes of up to 1,000W, but doing so can create an internal fault and shut the power supply down.

The battery took between seven and eight hours to charge to full in my experience, although the charging method and whether or not you’re powering any devices will change that speed.

Keep in mind that this power supply is rated at 500W continuous, which means you can’t use it with anything that draws more than 500W during normal operation.

The Aeiusny 288WH Portable Solar Generator includes four USB charging ports. According to the labels next to the ports, two are capable of putting out 1.0A, and the other two can put out 2.1A. That means your phones and other devices should charge about as fast as they would if you were to use a 1.0 or 2.1A USB charger or plug into a powered USB port in your computer.

In practice, both ports put out the same amperage. When plugged into my Pixel 3, each port provided 1.46A. Other devices that I plugged in all drew between .46 and 1.46A, but none drew more than that.

There are no USB-C fast charging ports, so you have to use the power outlets and pack a charger if you want to take advantage of the fast charging capabilities of any specific device.

With an MSRP of $300, the Aeiusny UPS-500AD is an expensive device. It’s far more expensive than most consumer grade battery packs and similarly-sized UPS devices, but you have to take into account the fact that this is a UPS that you can take with you. That gives it some extra utility, since you can use it as a UPS at home for any devices that use less than 500W of power, and then throw it in your truck for a weekend of camping.

It also has a built-in pure sine wave inverter, which is a huge value add. Most battery packs like this provide a dirty, stepped sine wave that can damage some delicate electronics like CPAP machines.

Even with its expensive price tag, the Aeiusny UPS-500AD isn’t that out of line with the competition, and it even provides more features than some similarly-priced battery packs.

The Aeiusny 288WH Portable Generator is expensive, but the value is definitely there to support the price tag.

The Jackery Explorer 240 provides stiff competition for the Aeiusny, with a decent 240WH battery capacity and an MSRP of $249. It’s slightly less expensive than the Aeiusny unit, features a much more robust molded handle, and has nearly the same battery capacity.

This is a great portable UPS if you don’t mind the price tag.

The Aeiusny 288WH Portable Generator is expensive, but the value is definitely there to support the price tag. If you’re looking for a portable UPS that can handle 500W continuous output, and you don’t need a ruggedized commercial or industrial product, this battery pack has everything you need to stay powered up through a long weekend roughing it, or even longer if you buy the optional solar charger.

Spanish
× How can I help you?
Scroll To Top